We area a chef-driven restaurant. Our passion for food and fine dining comes first for our guests.

We invite you to join us for an unforgettable culinary experience. 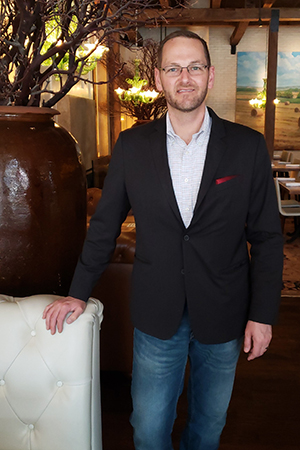 General Manager Dain Cooke worked at Cameron’s American Bistro as a server assistant in 1996 before switching careers. He later returned to Cameron Mitchell Restaurants in 2008 as a server and bartender, and was promoted to the dining room manager at Cap City Fine Diner and Bar in Gahanna. He has also worked at Marcella’s in the Short North as a server, bartender, dining room manager, general manager, and was most recently the general manager of Marcella’s in Denver.

His greatest advice to associates is to reach out to likewise individuals and learn from their experiences in order to grow professionally.

Dain holds a degree in hospitality management from Columbus State Community College and is a member of the Theta Chi Fraternity.

When not at The Guild House, he enjoys attending community events, bike riding and dining out. 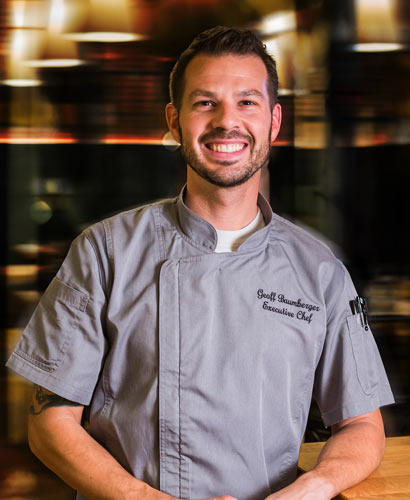 Long before Chef Geoff Baumberger was the executive chef of The Guild House, he began cooking holiday meals with his family. As a child, he found inspiration and a love of food from the memories and experiences with his loved ones. Cooking became a way for him to connect with people – not through the food, but through the shared meal and time with his community. As a high school student, he pursued a culinary program that exposed him to the restaurant business and opened his eyes to the endless career opportunities the industry offered. He was hooked.

Geoff attended The Culinary Institute of America and was introduced to Cameron Mitchell Restaurants (CMR) in 2002 during an externship. Upon his graduation in 2003, Geoff returned to Columbus and began working at various CMR concepts. He eventually transitioned to Ocean Prime in Phoenix in 2008. After brief stints at other restaurants, Geoff returned to CMR in 2015 to open Ocean Prime in New York City. He was most recently executive chef of El Segundo in the Short North Arts District of Columbus. His new role as executive chef of The Guild House allows him to explore the creative freedom of an artisan concept.

“I enjoy CMR as a whole for the diversity of our brand,” says Baumberger. “We have so many restaurants that each have a unique style and feel. Even some of our concepts with multiple locations are different in their own way.”

Geoff advises aspiring chefs to develop standards and expectations early. “Our industry is extremely competitive, and separating good from great throughout daily habits will lead to success,” he says.

Outside of the kitchen, Geoff loves spending time in the great outdoors – golfing, snowboarding and grilling. He always has ice cream in the freezer, and his kitchen is never out of chili garlic paste. Going back to his roots of holiday cooking, Geoff says the meal his family requests the most is Thanksgiving dinner.